This sermon was first preached on October 21, 2018 at First Congregational Church, Kalamazoo MI.

One of my pet peeves is when Christians use Jesus to try to control or manipulate other people. This is a trap that preachers especially can fall into, and it’s one of the reasons I fully support laws that prohibit preachers from endorsing political candidates or parties in the pulpit. There are days when I feel the temptation to wield Jesus like hammer to drive home what I think is best for our nation, but I have enough training in professional ethics and Calvinist theology to know that succumbing to that temptation would be an abuse of power and a moral failure.

And it would probably backfire anyway. Many of those manipulation tactics do. When I was a child and tried to manipulate my younger brother by telling him that our mom would love him more if he played the game I wanted to play, it never worked. He ended up in tears, and has an embarrassing story to keep telling about me decades later.

When I hear about people trying to invoke Jesus to manipulate others, the one solace I find is in the fact that Jesus resists being used in that way. For instance, when my husband was in high school at a private Christian school, his teachers tried to control their students by asking them “What would Jesus do?” and imploring them to read the Bible and imitate Jesus. I think they were expecting students to respect authority and stop cheating on tests. Instead, my husband did read his Bible, took Jesus very seriously and started buying burgers for the homeless men he saw on the side of the road on the way to school. It had no positive impact on his classroom behavior.

When we are tempted to use Jesus to prop up our own power or exert control over other people, we are betraying the very nature of who Jesus is, and what it means to be his disciple. That’s what stands out to me in this morning’s passage from Mark—Jesus refuses to participate in the disciples’ power games, and he models a completely different way forward for his followers.

There are two different ideas about power at play in this passage, and they are ways of understanding power that continue to be at odds with one another today. One way of defining power implies domination—power is power-over—the ability for one person or entity to impose their own will or purpose on someone else. The party with a majority exerts the power of their votes to impose their political goals despite the opposition of their political opponents. Or, in a more subtle way, when two people disagree about some decision, one person uses their “power of persuasion” to sway the other person to their side. There is no denying that this kind of dominating power is a reality in our world—at play in politics, in every organization that has a hierarchy, and in many of our personal relationships. Jesus talks about this as the power to “lord it over” one another. 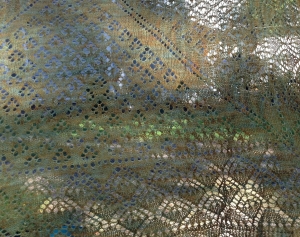 But there is another way of thinking about power—power-to. Creative power. Power as the capacity to enact good. The scholar Jean Baker Miller describes this concept of power as “the capacity to produce a change — that is, to move anything from point A or state A to point B or state B.” This is easy to see on an individual level—for instance, I am a knitter, so I can use my skills and my money and my time to create something beautiful and useful. I am using my power to create something—something I can use myself to keep warm, or something I can give away in order to care for someone else. But this kind of power can also function on a larger scale. Groups of people can organize around a desire to share knowledge or resources; book groups, quilting bees, barn-raisings, volunteer fire departments, community gardens—all of these are ways that groups of people pool their power together in order to accomplish something they cannot do alone. Jesus points us toward this kind of power when he says that those who are greatest are those who serve.

First of all, wouldn’t it be amazing if people in position of power, whether that be political power or economic power, or administrative power viewed their role as one of serving others? That would transform our planet.

But I also have an impulse to push back against this invitation to service—what about people who are told that serving others is their lot in life? What about women? What about people of oppressed races and classes? Hasn’t this passage been used to maintain power over people by telling them that Jesus wants them to serve? And yes, it has. Hence my pet peeve. Jesus gets used to manipulate people all the time. But that’s not what Jesus is doing in this passage.

Jesus is not advocating that people submit to dominating powers—he is not even telling the disciples they should serve him. He describes himself—the person with the most authority in the room—as being called to serve. He is not excusing abuses of power by valorizing servanthood. He is also not suggesting that enduring oppression or suffering is God’s will; when he asks James and John if they can endure the suffering that comes with following him, they are confident that they can, and they expect that enduring that suffering will secure them positions of honor. But Jesus corrects them. They will not earn special honors by entering the oppression Olympics. Suffering is not something we choose in order to please God. Suffering is a natural consequence when we follow Jesus in ways that challenge the powers of the world.

In this conversation, Jesus is offering his disciples a different way of relating to power. These 12 men were in the same complicated relationships of power that many of us occupy. They had very little political power as residents of an occupied nation. But they did have implicit power over most of the women in their lives. Some of them had economic power from their jobs; most of them walked away from their livelihoods to follow Jesus. But they still had this itch—this assumption that the goal they were moving toward was more power-over. That they would confront the powers oppressing them, overturn them, and gain their own position of power in a new kingdom order.

And Jesus knows that is not the plan. Jesus has been telling these disciples again and again that he is about to die, and they do not understand. They can’t comprehend that Jesus’s victory will not include gaining domination; it will not lead to a position of power over others.

Instead, Jesus’s victory will demonstrate once and for all that power-to-create; power-to-heal; power-to-serve others cannot be conquered. It cannot be taken away. Even death cannot neutralize this power.

When our only understanding of power is domination, that kind of power is inherently insecure. If you have to be over someone in order to have power, your power can be taken away—either by those below you wresting the power away, or by someone else who demonstrates that they have the capacity to dominate you. Dominating power must be defended and horded and it leaves the most powerful people in positions of great vulnerability. You only have to trace the bloody history of the murder of European monarchs to find evidence of this vulnerability. And it is this concept of power that leaves men feeling vulnerable and disenfranchised when women gain power. It is this concept of power that lead white supremacists to feel threatened by the idea that Black Lives Matter.

But power to do good, power to use our own skills and capabilities to create beauty, to heal ourselves and our communities, to nurture health in our families and land, to serve those who we love—that is power that cannot be taken away. Joanne Dewey, in her commentary on Mark, highlights all the ways Jesus exercises this kind of power in his acts of service. He does not exhaust himself serving people who have power over him—he uses his skill and his talents to heal the people he can in one day, and then he rests. Jesus’s way of serving offers a corrective to those in positions of power-over others, but it also offers good news to those who have been denied power in those hierarchical structures. Jesus’s way of serving involves owning our strengths and honoring our limits, exercising autonomy in ways that build community, serving others, not because they have power and we don’t, but also not in a paternalistic way that assumes we know what they need better than they do. Every person Jesus serves walks away empowered to live a more whole, more meaningful life. And regardless of where they are located in the power structures of their society, they discover that they also have power to do good. Power to heal. Power to proclaim good news.

I have experienced this power this month. It is real. It sustains me in the bleak moments when I despair over the political divisions in our nation. It sustains me when I feel the oppressive powers of patriarchy in my body. Because I am learning to feel a different power there, too.

It is the power that comes of being created in the image of God and knowing that I am beloved. I have felt this power as groups of women from this church gather and pray. I have experienced it with friends who need to cry and laugh and find comfort in each other’s company. I have seen in it young people who own their sexual orientation, and believe God loves them exactly how they are in spite of parents and peers who reject them. I have seen this power at work in this church every day, as the time and energy of staff and the resources of the church are spent to serve folks within these walls and beyond. This is Jesus.

As we approach election day, and the political pundits ring ever more loudly in our ears, you will not hear any preacher from this church invoking Jesus to sway your vote. I do hope you will vote. The power possessed by our federal and state government has a tremendous impact on the well-being of people on our doorstep every day, and we should all care who wields that power and to what end. But that power—that power-over-others—is not the only power at work in our world. And we know that no matter the outcome of these midterm elections, no matter the trajectory of our nation, no matter the stability of our economy, we live with a power that cannot be taken away from us. We are members of the Body of Christ—a body that endured the violence of death and now stands in defiance of those dominating powers. A body that lives in resurrected in glory, loving and serving the world with the same power-to-do-good that created the universe. This is the Risen Christ. This is Jesus.

So, when we find ourselves trying to control or manipulate others; when we feel the impulse to use the tactics of our opponents against them; when we begin to buy into that idea that the ends justify the means; or when we get so caught up in what we think is best that we are willing to do anything to make it happen, I hope you will remember with me that we have embarked on a different path. We have another way. We have a different relationship to all those powers of the world. As a beloved spiritual puts it, “You can have all this world. Give me Jesus.”